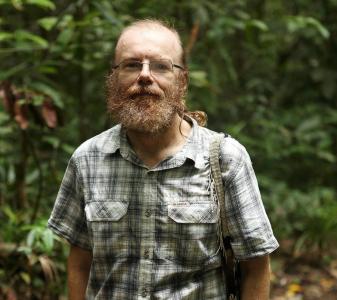 Biologist Vojtěch Novotný received the prestigious Praemium Academiae 2021 award. The Czech Academy of Sciences supports this important scientific award with a generous grant of up to 30 million crowns, which laureates can draw over six years. It is to be a financial as well as a symbolic moral award for the scientific excellence of the laureates. "They are really the best of the best," confirms Eva Zažímalová, Czech Academy of Sciences president. "The academic award is intended to create such conditions for their research that they can develop their potential for the benefit of the Academy of Sciences and the entire Czech science," adds the chairwoman.

His best-known research has looked at how many insect species live in the tropics and on the planet. Professor Novotný studies the relationships between plants, herbivores, predators and parasites in tropical forests. He aims to explain how these species respond to natural and man-made disturbances of forest ecosystems. He believes that if we want to protect nature, we must understand the rules according to which it works. The research, funded by the Academic Award, will address a key issue in ecological theory: how tropical forests maintain high species diversity and what mechanisms allow hundreds and thousands of species of plants and animals to coexist in these ecosystems.

Professor Vojtěch Novotný (born 1964) is a leading Czech biologist. He focuses mainly on studying the ecology of tropical forests in comparison with the forests of Central Europe. Since 1997, he has been leading a research centre in Papua New Guinea, working in the forests of Panama, Guyana, Cameroon and Vietnam. He also worked in Great Britain and the USA.

In the Biology Centre CAS, he built a research group consisting of 10 laboratories studying the ecology and evolution of biological diversity, each with a slightly different methodological emphasis on ecology, phylogeny, biochemistry and biostatistics. This international team has become one of the leading ecological workplaces in the Czech Republic and is also successful in the competition for grants from the European Research Agency.

Professor Novotný also focuses on developing research capacity in the tropics, especially in Papua New Guinea, where he founded and runs the NGO New Guinea Binatang Research Center. It operates an internationally significant research infrastructure, including a vegetation area of ​​more than a quarter of a million plants, a crane giving scientists access to treetops or a research area covering forests from 200 to 3700 m above sea level. The center also trains half of all postgraduate biology students in the country, and its education of paraecologists is considered a model for other tropical countries. It also participated in the establishment and management of two protected areas of tropical forest with an area of ​​300 km2.

Vojtěch Novotný graduated from the Faculty of Science of Palacký University in Olomouc. He described his findings from the largest tropical island in a book of essays on Papuan (semi) truth. He is a member of the Learned Society of the Czech Republic and Academia Europaea. He also teaches at the University of South Bohemia.