In fall, the reservoir releases a large amount of methane bubbles 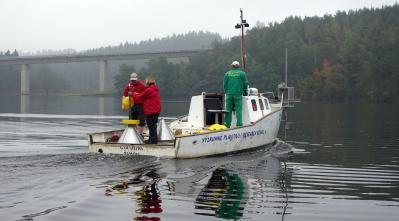 Researchers of the Institute of Hydrobiology and SoWa Research Infrastructure are engaged in studying the release of greenhouse gases, especially methane, from reservoirs. The results of their research have recently been published in the prestigious scientific journal Water Resources Research.

Gas ebullition (bubbling) represents one of the major pathways transferring greenhouse gases from lakes and reservoirs into the atmosphere. In particular, methane ebullition, as a rapid means of transport, compared to the diffusion, has recently raised international interest in its contribution to global warming. In our research, we revealed the highly variable spatiotemporal dynamics of the ebullition, namely in the Římov reservoir. The results showed that in the spatial scale the ebullition is mainly determined by the distance from the principal inflow as a source of organic material for the subsequent formation of methane in the sediments. The most prominent period for the ebullition turned out to be fall, where the ebullitive fluxes were seven times higher than the rest of the year. This increase was significantly supported by the expansion of active areas to the deeper parts of the reservoir, following the annual thermal maximum of the sediments.

In the picture you can see fish and bubbles.