Projecting the effects of climate change on fish populations 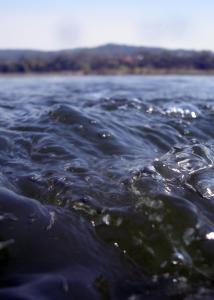 Climate change is one of the biggest threats for biodiversity nowadays, affecting many aspects of species life, range of suitable areas of occurrence and ecological interactions. Despite of the severity of the phenomena, the number of studies simulating the effects of climate change on fish populations is still rare. In the last years the scientific community is intensifying the efforts in the topic, but most of the studies performed so far dealt with commercially exploited fish species, while small-bodied species are largely neglected, even though they are a crucial link between low and high trophic levels in the food web of aquatic ecosystems.

Our study simulated the effects of climate change on the population of the common goby (Pomatoschistus microps) by setting-up a stage-structured model using information on many biological and ecological parameters of the species traits.

Following the IPCC (Intergovernamental Panel on Climate Change) projections on temperature and precipitation regime shift we were able demonstrate that the population of the common goby will most likely experience a shrinkage in the near future, being significantly affected by extreme climatic events like droughts (population decline) and floods (population increase). More information about effects of climate change on the common goby population can be found in the publication: