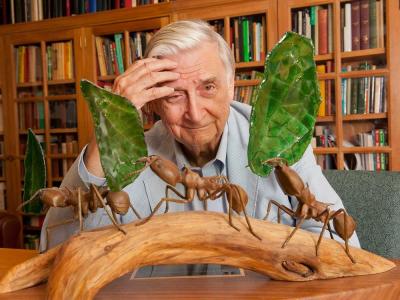 Edward Osborne Wilson (1929–2021) a biologist, naturalist, writer, one of the greatest scientific minds of the 20th century, passed away this week. On that occasion here is a personal remembrance by our colleague Milan Janda.

This week we lost E.O. Wilson. There have been many obituaries and countless personal memories remembering him and his generation-spanning influence across sciences. It reminds us how important his work and ideas have been but also how generous and enriching were the personal encounters with him. Here is my account of how E.O. Wilson intertwined with our academic lives and inspired us.

My very first undergraduate project was an evolutionary study of Lasius ants. Although Wilson’s popular books have been essential reading for the young biologists across the fields, I was a bit surprised to find out that one of the principal works I had to study was Wilson’s revision of the genus. Soon after, while having the privilege of working in New Guinea with a fantastic team of colleagues, E.O. Wilson’s studies from the 1950s were among the essential reads for ant research in the region. For the years on, I was always amazed how despite a brief visit of the region, his collections of Melanesian ant specimens remained a crucial base for knowledge of the fauna for decades on.

Several years later when I finally met Ed while visiting the Harvard Museum of Comparative Zoology (MCZ), we exchanged stories from the field in New Guinea, commented on how the environment has changed and he was very generous with his recommendations and with providing access to his personal library. Going through the drawers of his numerous articles I finally fully realized how an exceptional person he is. The incredible span of research topics he covered, the productivity, and that it was often the work of his and his collaborators through which important and innovative ideas were put forward. Just side by side was a taxonomic revision of an obscure ant genus, with a ground-breaking paper on biogeographic theory or a popular book that inspired generations across the planet to study biodiversity or care about nature conservation.

I think for me and maybe for many who interacted with his work primarily through the myrmecological angle, Ed taught us how to think about small topics in a broader perspective and how even a seemingly simple collecting of insects can transform into essential biological findings which are valid across organisms and ecosystems. He also engaged in battles that our generation didn’t have to worry about as much anymore. The idea that human nature is subjected to the same biological principles as other animals became generally accepted by other fields and the debate moved onto more nuanced issues. But it was the restless work and popularization by him and his contemporaries that changed the paradigm and opened new research insights into human societies.

Later, when I had an opportunity to work at Harvard MCZ, also thanks to the support of his formal students and colleagues, there were more opportunities for interacting. Although rare, our meetings were always very inspiring and fun. Ed has been very generous with providing his space for our research meeting, with access to his library, or with supporting our students who worked with new collections from South Pacific.

Meantime, his work has been omnipresent throughout our research. Spending hundreds of hours over his museum ant specimens and comparing them with our material collected five decades later, made me appreciate how excellent a collector he was and how good insights into Melanesian fauna he made. Coincidentally, when we revisited the biogeographic history of South Pacific ants with new phylogenetic analyses, it was Ed’s recent collections from Vanuatu which were an important contribution to the study.

It never stops to impress me how even with the fraction of today’s knowledge about the distribution and taxonomy of South Pacific ants, Ed gathered visionary insights and was able to articulate the general patterns and predictions, many of which hold until today. His ideas are still an essential base for many research studies even if many things changed or proved to be different. It’s not a coincidence that with our students and colleagues we are still trying to test various aspects of Taxon Cycle theory, biogeography, and ecological history of ants, and many other ideas that he proposed.

E.O. Wilson was one of those exceptional people who even with a brief conversation or text kept us motivated for years on. He inspired us, provoked us, connected us and his ideas and work will stay with us for generations.